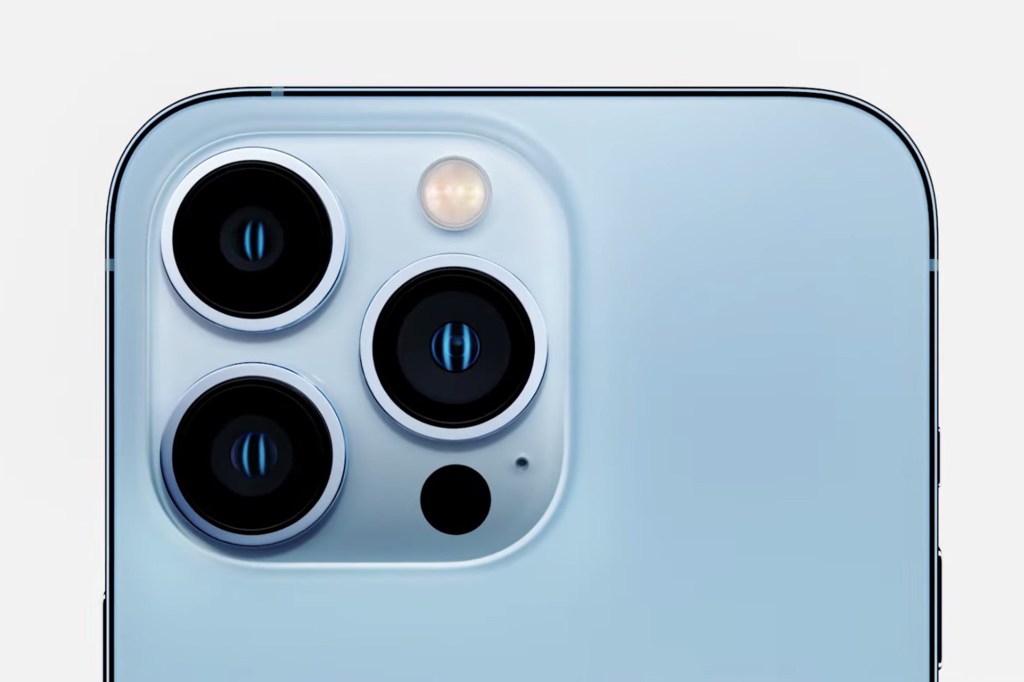 Apple revealed a slate of new iPhones on Tuesday with substantial camera upgrades, as well as new iPad models and an improved Apple Watch.

The new iPhones, revealed by CEO Tim Cook in a livestream event titled “California dreaming,” will arrive in time for the sales-heavy holiday season and cost the same as their predecessors.

The new iPhone 13, which will start at $699, features a stronger camera and processor but an exterior design that is virtually unchanged from its predecessor, save for a smaller “notch” at the top of the screen.

The iPhone 13 Pro and iPhone 13 Pro Max, meanwhile, will sell for $999 and $1,099, respectively. The phones will remain mostly unchanged on the exterior but feature stronger cameras and processors. They will also have “Super Retina XDR Displays” that the company said are 25 percent brighter than previous models.

The most expensive iPhone Pro models will also come with a 1 terabyte storage option — the most storage on any iPhone ever.

All of the new iPhones will be released on Sept. 24.

Both the iPhone 13 and iPhone 13 Pro will see serious camera upgrades, including a “cinematic mode” that functions as a kind of “portrait mode” for video. The feature — which Apple touted in a video featuring “The Hurt Locker” and “Zero Dark Thirty” director Kathryn Bigelow — will allow users to focus photos in a way that mimics Hollywood-quality films, according to Apple.

A new “photographic styles” feature will also let users change tone, warmth and other aspects of photos in real time, the company said.

Wedbush Securities managing director Dan Ives told The Post he expects Apple to see a surge of sales during the fall and winter.

“I think it’s going to be a bonanza of growth that they’re going to see this holiday season,” said Ives, foreseeing a rush of sales due to “the pent up demand… combined with the enhanced battery technology, camera, features and new chip.”

“They kept price points unchanged — there were some fears they were going to have to increase prices,” Ives added.

Ongoing chip shortages have led to increased prices for tech products and have stymied production for smartphone makers including Apple, forcing the company to delay the launch of its iPhone 12 by about a month last year.

Yet Apple brushed off chip supply concerns when unveiling its new A15 bionic chip, which will be featured in the new iPhone models.

“Frankly, the competition is still playing catch-up to our chips — not just from last year, but even from two years ago” said Kaiann Drance, an iPhone marketing executive.

Ives predicted that the phones’ new features and unchanged price point will prompt many “fence-sitting customers” who had been holding onto older iPhones to upgrade, adding that 25 percent of current iPhone users haven’t upgraded their phone in more than three and a half years.

Yet despite Ives’ bold predictions, Apple stock fell slightly in response to Tuesday’s announcements, declining more than 1.4 percent from $148.97 at the beginning of the event to $147.39 shortly before markets closed.

Apple also revealed a slate of new iPads on Tuesday, including a redesigned iPad mini and an upgraded version of the standard iPad with a bigger screen. Both devices also have boast improved cameras and faster processing power — and will be available starting next week, according to the company.

The standard iPad will start at $329, while the iPad mini will go for $499 and up, the company said.

Apple’s new watch, called the Series 7, boasts a 20 percent larger screen than its predecessor and a sleeker, more rounded design. The watch is also less likely to crack and is more resistant to dust, the company said.

The series 7 will go for $399 and be available sometime this fall, the company said. Apple’s cheaper watch options, the Series 3 and SE, will retail for $199 and $279, respectively.

New software for all Apple’s company’s watches will respond to injuries while biking, displaying an option to call for an emergency SOS if it detects that a user has fallen.

Apple also said that “Apple Fitness Plus,” its subscription-based exercise service, is adding group workout classes. That could poach business away from Peloton, the popular but beleaguered spin bike company that is bleeding money.

Apple revealed the new offerings during a slickly-produced broadcast called “California dreaming” that ran for more than an hour.

Apple has rolled out a new iPhone in September every year since 2013 — except for 2020, when the launch was delayed until October due to pandemic-related production setbacks.

Analysts had not expected any dramatic iPhone overhauls this year, after Apple released its first ever 5G iPhones in 2020.

Tuesday’s reveal comes just days after a federal judge ordered Apple to loosen its payments rules and allow developers to route users toward non-Apple payments options, a move that could let developers avoid the company’s 30 percent cut it takes on many sales, putting billions of dollars in Apple revenue at risk.

But Fortnite maker Epic Games, which brought the suit that led to the order against Apple, plans to appeal the ruling because the judge overseeing the case rejected 9 out of 10 of its counts.

The new iPhone launch also comes as Apple is facing scrutiny from privacy and civil liberties activists over a plan to scan users’ devices for child pornography.

Apple revealed the “child safety” feature in August but said in September that it would delay and modify it after a backlash from critics, who said out that the tool could be misused by repressive governments to track and punish users for all kinds of content besides child pornography, including political content.

— Additional reporting by Will Feuer

A Day After Wife’s Funeral, In-Laws Told Great Grandfather He’d Have To Move Out Of His Home A Day After Wife’s Funeral, In-Laws Told Great Grandfather He’d Have To Move Out Of His Home