in US News
7 min read 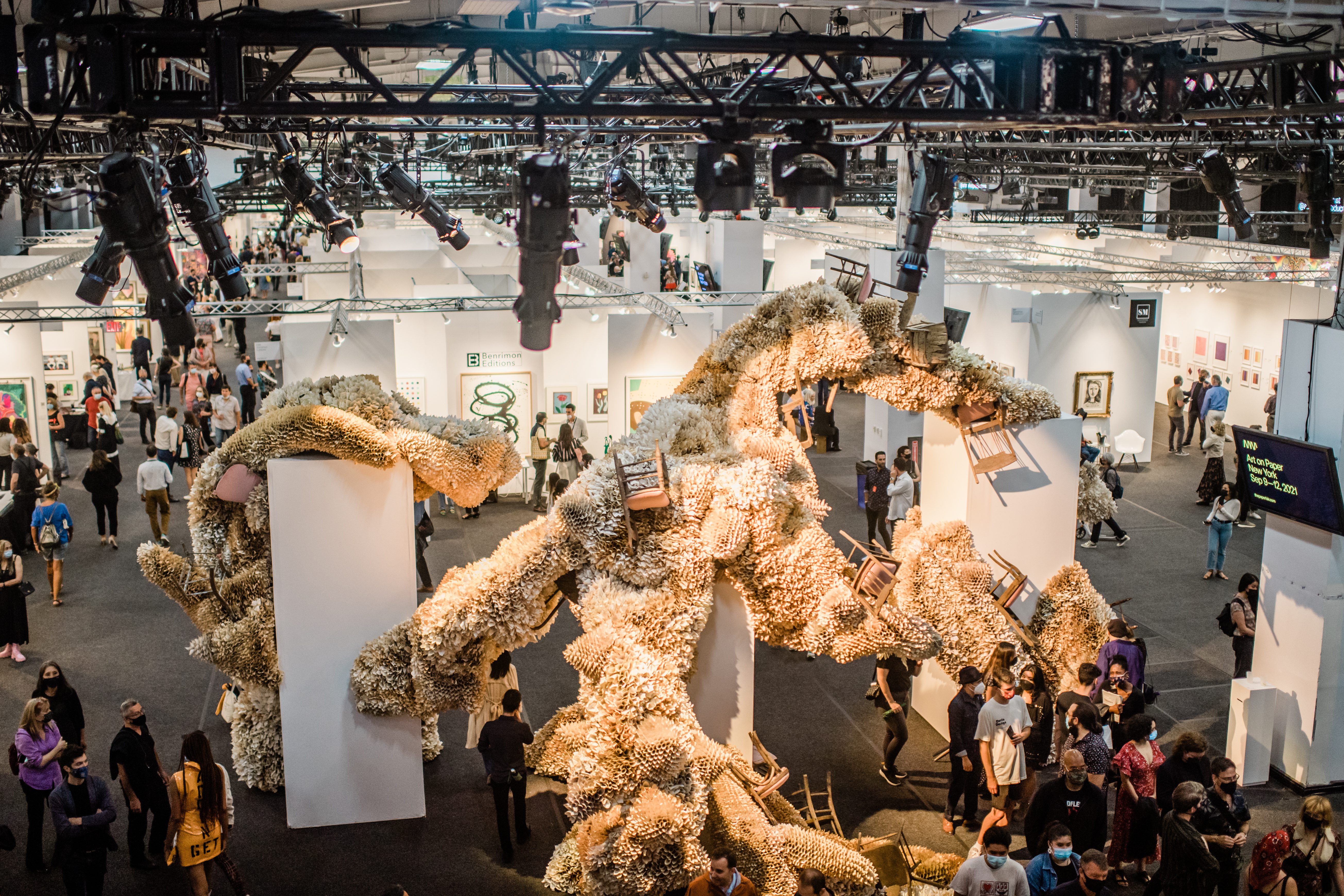 The “Art on Paper New York” fair, held at Pier 36 downtown on 9-12 September, gathered over 100 international and US-based galleries for the first time since March 2020. Focusing on modern and contemporary paper-based art, the fair’s seventh edition showcased the diversity and resilience of the paper world following the pandemic hiatus.

Stunning live performances of traditional Mexican dance insufflated life and movement to the creations of American-born artist Nicolas V. Sanchez in his solo booth which notably showcased the mesmerizing, joyful artwork La mariposa en Jalisco. The painting depicts a muse and through her, the beauty and confidence of a female ballet folklórico dancer. It celebrates color, with the richness of the model’s vibrant lemon-gold dress, womanhood and Mexican heritage—both historical and personal. Art serves to document, preserve and cherish for Sanchez. His mother worked as a seamstress and we feel the intimacy of family, generous love and admiration in the artist’s influence and devotion to the hands that nourish. For Sanchez, whose work previously featured in solo and group exhibitions in the US, China, and Italy (2015 Venice Biennale), the pandemic was a time to help others in need. He painted smaller works to raise funds for COVID-19 and southern border relief initiatives and establish scholarships for young student artists. “I am essential?” he asked when we met at Pier36, in a nod to last year’s shutdown of so-called non-essential businesses which inflicted hardships to the creative community.

Nostalgia permeated through several other installations such as Marion Fink’s She silently prepared for the inner evolution. Represented by C24 Gallery and completed this year, the dream-like print underscores the solitude of a young woman caught between the longing to fulfill parallel, unexplored aspirations and the complexity of engaging in an alienating reality. To reconnect with the memory of his grandfather, Irish photographer Bryan Glynn set out to capture the last moon of 2020 in a compilation of over 1,000 frames using a telescope. Printed on a luminescent paper, the moon projects a dimmed luminosity when in the darkness, recalling the alleviating closure of a difficult year and the uncertain hope of renewal.

While Glynn resurrects a muted night, the buoyant, loud pieces of Doug Meyer’s “Wyldlands” series turn to the future, to a mysterious year of 2036 in the reimagined community of Wyldlands. They summon to transcend the confines of the imagination and to embrace a dystopia where human and animalistic influences create a hybrid ecosystem for survival. The artist projects the far-ranging repercussions of the pandemic, through for instance, a decade-long period of confinement and the prevailing aesthetics of bunkers. Storytelling becomes an outlet to dialogue with fear and hopelessness. Questioning humanity, the neon realm of “Wyldlands” shows peculiar characters and scenes of an unsettling tomorrow with the presence of erotic symbols and accessories that mask and subdue, more than enhance or entice, desire.

Loss defined the painful experience of countless people in the last 18 months. Peter Tunney’s Skull (Picasso on the Brain) completed this year adds a neo-pop touch of memento mori to an otherwise grim memory of epidemiological curves and daily count of casualties.

Established in 2020, the MOLLY+FRIENDS gallery features works of saturated escapism. To cope with the isolating effects of the pandemic, deaf Israeli artist Yossi Ben Abu channeled anguish in twelve visual and textured representations of hope inspired by Pantone vignettes, such as the black-to-crimson gradient Let’s dance or Pantone – The Moment which exposes dissonance through clashing colors, leaning from lime green to deep fuchsia. Also displayed is the aptly-named digital piece Nothing’s Forever from singer/songwriter Denitia and Colombian designer Eduardo Palma which builds on their earlier collaboration for Denitia’s Forever music video, released in April 2020. The multimedia artwork situated in a post-physical paper world offers an immersion of entrancing musicality in a visual journey of psychedelic, hypnotic alter-realities.

Samuelle Green’s Permutation 3 installation propelled paper to new heights and bendability as the medium conveys the illusion of minerals, corals or crystals in an imaginary cave or seabed. The artist repurposed used materials, reminding us that paper speaks to the pressing issue of recycling and sustainability to mitigate the catastrophe of excessive consumerism and resulting over-exploitation of natural resources. In Green’s sculpture, book pages are whimsically folded and superimposed, mimicking the organicity of honeycombed, alveolar patterns which together create a wall, a sanctuary, the softness of a retreat, perhaps even the insides of a creature. It’s an introvert’s shelter, a silent refuge silencing the sirens.

Echoes of the Black Lives Matter chants and police helicopters hovering above protests during summer of 2020 reverberated in West Chelsea Contemporary gallery’s display of Cey Adams’s American flags. The artist, who takes influence from the graffiti, hip-hop and pop culture scenes, engages on race, class and the ambivalence of American values. He created for Juneteenth two bipolar American flags —a white rendition above a black one. Their juxtaposition exposes contrast and separation; they live alongside each other rather than with each other. The pieces include collages of various consumerist, popular culture artifacts and references which led me to consider the flag as an extension of a USA brand. Beyond Juneteenth and the fight for a long-overdue racial equality, I also identified in them resonances of a post-9/11 fracture as we are yet to derive lessons from twenty years of continuous wars abroad fought in the name of the stars and stripes.

There is the timely then, but also the timeless—in the elegance of black ink, tradition and the consolation of a dark canvas. NYC and Tokyo-based Seizan gallery presented seven works of Toshiyuki Kajioka on Japanese paper, mounted on wood panels. The artist gives linguistic and creative depth and meaning to black, which is commonly considered to absorb all colors to reflect none. Using sumi ink and graphite pencil, Kajioka paints water-like surfaces. Under specific lighting arrangements, the paintings invite to meditate on grief, flow, liminal geographies encroaching upon our perceptions of limits and the necessity to conquer inner and outer white spaces.

It’s uplifting to see the art fair (superbly organized) returning, as a sign of the art scene slowly recovering from the pandemic—albeit regrettably on the tame side. To bear witness to and denounce the absurd, obscene and infuriating times and engage at large with the historical collective experience we continue to traverse, I craved occasionally for more provocative curatorial choices. Instead, one attempted to decipher subtle hints of such vivid emotions in themes, colors, and absences, zigzagging from booth to booth among the masked, vaccinated crowd in that new normalcy. 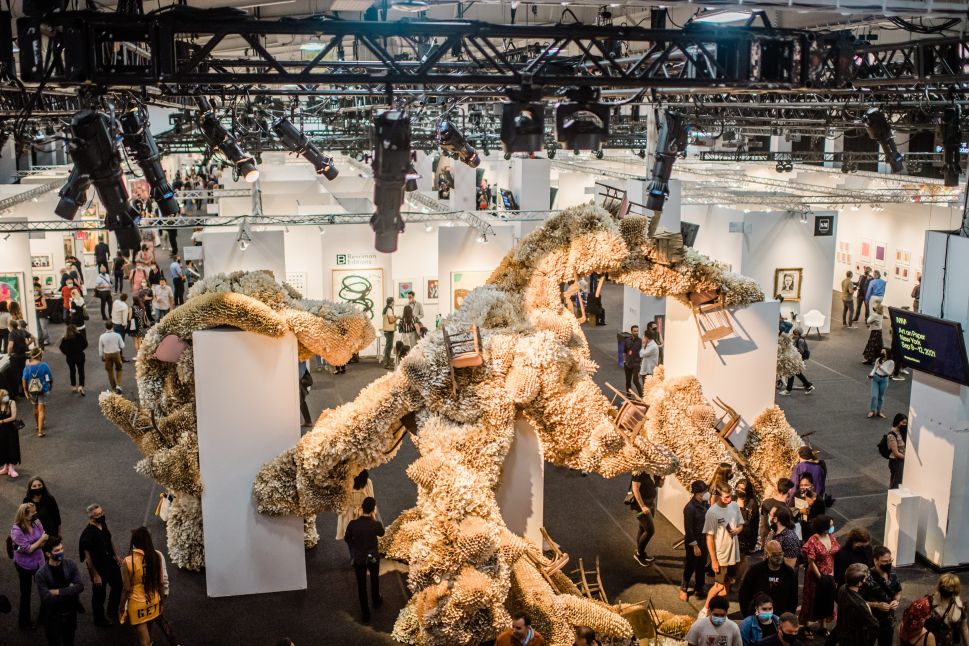 Porsha Williams Has Merch Ready For The New Season