Biden’s ‘devout’ faith is a news-media talking point, but a survey about it somehow isn’t — GetReligion 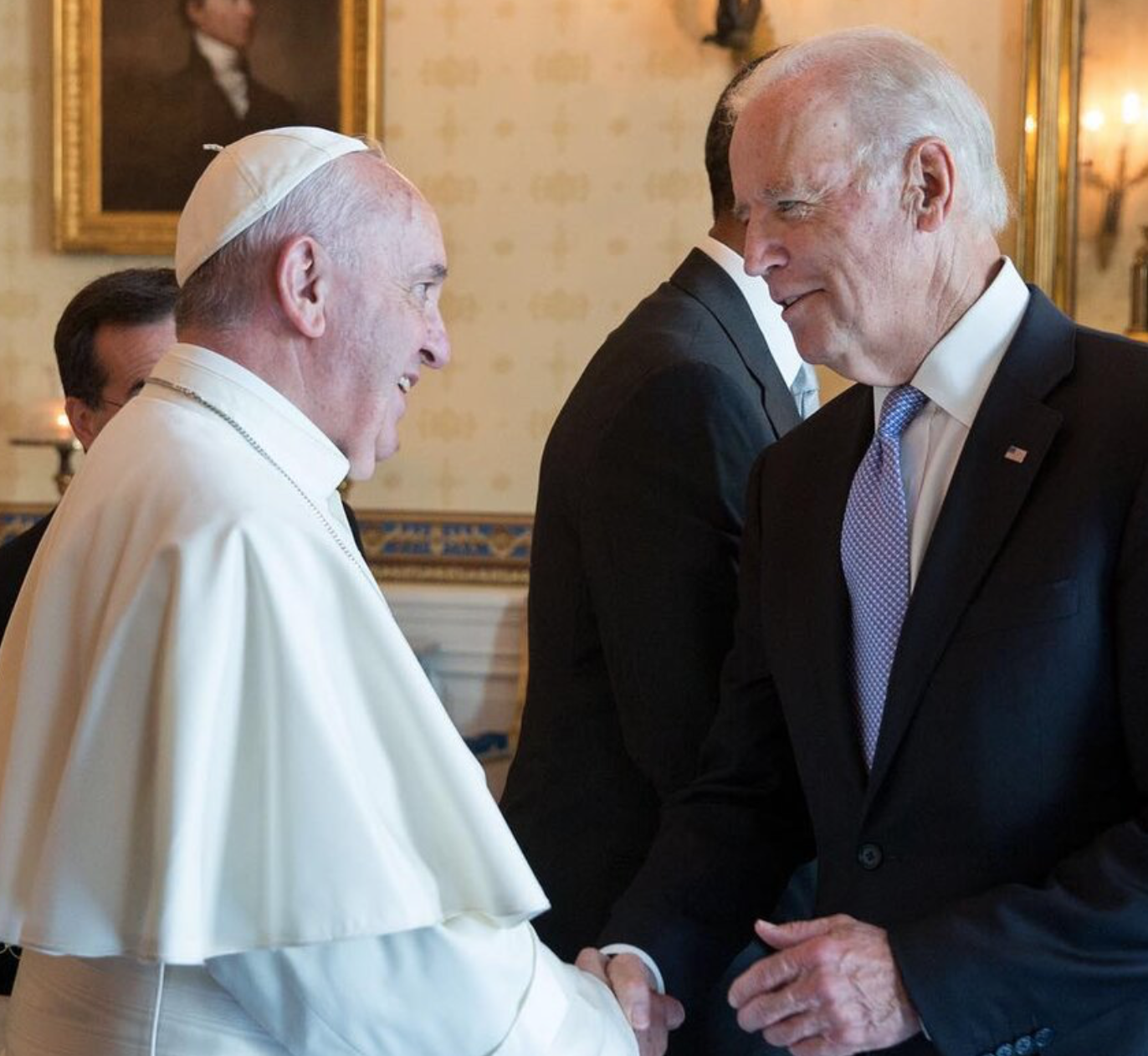 The culture wars have been on full display during the first two months of the Biden presidency.

It isn’t so much that Joe Biden is fueling the wars — he’s actually steered clear of many of these recent battles that brew on Twitter and cable TV news.

Nevertheless, his actions over the arc of a career that spans almost five decades, as senator — vice-president and now commander-in-chief — certainly provides fodder for many Christians who differ with his policies and politics.

The president’s frequent references to his Catholicism, mixed with affirmations of policies that clash with Catholic teachings, are at the heart of this discussion in public life and, every now and then, in the mainstream press.

USA Today, in a news feature from earlier this week, made the following observation:

When the Vatican announced last month the Catholic Church wouldn’t bless same-sex unions, the White House dodged when asked for a response from Biden, the nation’s second Catholic president and a gay rights supporter who officiated at a wedding of two men five years ago.

“I don’t think he has a personal response to the Vatican,” White House press secretary Jen Psaki said during a briefing that day. Psaki reaffirmed the president’s support of same-sex unions: “He’s long had that position.”

A couple of weeks earlier, Psaki punted when asked why Biden made no mention of Dr. Seuss in his proclamation declaring March 2 – the children’s book author’s birthday – as the annual “Read Across America Day.” Psaki suggested a reporter reach out to the Department of Education, which she said drafted the proclamation.

Psaki’s nuanced response to both questions underscores the delicate balance the White House is taking as Biden navigates a minefield of hot-button social issues ranging from the gender of children’s toys (see Mr. Potato Head) to transgender athletes in school sports to GOP complaints about “cancel culture.”

It was on March 30, a few days before Easter Sunday, that Pew Research Center released a study on how American Catholics view the president and how they view his approach to the Catholic faith.

Here is a sample of that study’s results:

Overall, roughly six-in-ten U.S. adults – including 63% of Democrats and independents who lean toward the Democratic Party, along with a slightly smaller majority of Republicans and Republican leaners (55%) – say Joe Biden is Catholic. Most of the remainder say they are not sure what Biden’s religion is, while about one-in-ten say that Biden practices a religion other than Catholicism or that he is not religious. A small handful of Republicans volunteer that Biden is a “fake Catholic” or a “Catholic in name only,” or offer other insulting comments.

While majorities in both parties know that Biden is Catholic, they disagree profoundly about the role of religion in his private and public life. Nearly nine-in-ten Democrats say that Biden is at least “somewhat” religious, including 45% who say they think he is a “very” religious person. By contrast, almost two-thirds of people who identify with or lean toward the GOP (63%) say that Biden is “not too” or “not at all” religious.

How did the mainstream news media that likes to call Biden “devout” (CNN did last year during the election) cover this very important study?

The issue may be too delicate for too many newsrooms that want to present Biden’s faith as the standard and often in contrast with the Vatican and church teaching. It would also have to conjure up former Cardinal Theodore “Uncle Ted” McCarrick’s former role as a Washington, D.C., powerbroker and how his fall from grace after allegations that included abusing seminarians forced Pope Francis to defrock him.

Instead, the Catholic press was all over the numbers. At the same time, Biden’s faith made it into the mainstream media ecosystem thanks to Time magazine — although the feature was posted online on March 31. The Pew numbers on Biden receiving Communion weren’t in the long feature and it appears that editors at Time ran it in time for Easter. The Time piece picked up on an issue that The Atlantic reported on just last month.

Here’s the main thrust of the Time feature:

Biden’s election comes at a complicated moment for the Catholic Church in America, which continues to reckon with a sexual-abuse scandal (and subsequent cover-up) that has caused widespread disenchantment with the institution. On one hand, Biden’s ascension is a capstone of the faith’s march to political acceptance. The nation’s second Catholic President oversees a government with unprecedented representation for the church. Six of nine Supreme Court Justices are Catholic, as well as the Speaker of the House, at least eight Cabinet secretaries and multiple other members of the Administration. One-fifth of all votes in the 2020 election were cast by Catholics, roughly half of them for Biden.

While Biden campaigned on some key policies the church favors—including advancing racial justice, ending the death penalty, addressing climate change and aiding refugees—he also advocates policies out of step with Catholic doctrine, such as expanding access to reproductive health care and increasing gay and transgender rights. For many top bishops and conservative voters, Biden embodies a more liberal version of the faith that poses a threat to the future of the church in America. His election “exposes a divide among American Catholics that’s been there for a long time,” says Maureen O’Connell, a religion professor at La Salle University. “There’s a big chasm, a growing chasm.”

Mainstream news outlets didn’t touch the Pew study. It’s very possible they didn’t so not to have to present both sides of the issues, a main pillar of the American press that is fast eroding in the internet age. Therefore, the Catholic press across the doctrinal spectrum took on the study and highlighted what worked best for their audiences.

The National Catholic Reporter, a newspaper on the doctrinal left, opened their news story this way:

Joe Biden, the second Catholic president in U.S. history, has made no secret about his faith, and a new poll shows that the majority of adults in the country is well aware of his Catholicism. Yet like members of his own church, those surveyed are divided along party lines over just how authentic his faith is and whether or not he should be allowed to receive Communion.

Overall, the piece did a very good job at being fair and presenting both sides of this ongoing rift within Catholicism.

The National Catholic Register, whose editorial stance is on the doctrinal right, opened their news account this way:

Two-thirds of U.S. Catholics say that President Joe Biden, who has contradicted Church teaching on abortion, marriage, and gender ideology, should be allowed to receive Communion.

This story, too, was reported fairly and presented both sides.

The Register story did one better, quoting church teachings and providing lots of context you may have already read in past posts in this space. Unfortunately, this is something too many news outlets consistently fail to do. Here it is:

The Communion question has resurfaced during Biden’s presidency, as some bishops have previously cited canon 915 of the Code of Canon Law to say that Catholic public officials should be denied Communion for their “obstinate” support for grave evils such as abortion, despite warnings from pastors.

Canon 915 states that Catholics who are “obstinately persevering in manifest grave sin are not to be admitted to holy communion.”

In a 2004 memo to U.S. bishops, then-Cardinal Joseph Ratzinger wrote that a Catholic politician who is “consistently campaigning and voting for permissive abortion and euthanasia laws” is engaging in “formal cooperation” in grave sin, cooperation that is “manifest.”

Biden has long supported legal abortion, while more recently he has supported the redefinition of marriage, taxpayer-funded abortion and transgender ideology.

I wrote about Biden’s need for safe spaces in terms of place to worship recently and it’s great for Pew to have taken a deeper dive into the issue regarding his faith and him receiving Communion. Nonetheless, the mainstream press’s inability to want to report on this study is telling.

The president’s Easter message got attention by the mainstream press. There was nothing controversial in it. If anything, it focused on COVID-19 vaccines and allowed news sites to connect Biden with the pope, who made a similar plea for vaccines that day. In an Easter op-ed Biden penned, which ran at Religion News Service, the president reiterated the pascal message of renewal a year into the pandemic. The column touched on vaccines and those who died — but it was the sort of generic, ecumenical message any president could have put his name on.

Maybe the lack of coverage around the Pew study isn’t a huge surprise. Biden was already labeled “devout” by the press during the election and now his own White House. They may think there’s nothing to see here, but those who read the Catholic press and regularly attend Mass — and also vote — know better.

I Thought My Job Was To Report On Technology In India. Instead, I Got A Front-Row Seat To The Decline Of My Democracy.

For Derek Chauvin’s trial attorney, it’s all about raising doubt