in Fashion and Lifestyle
8 min read 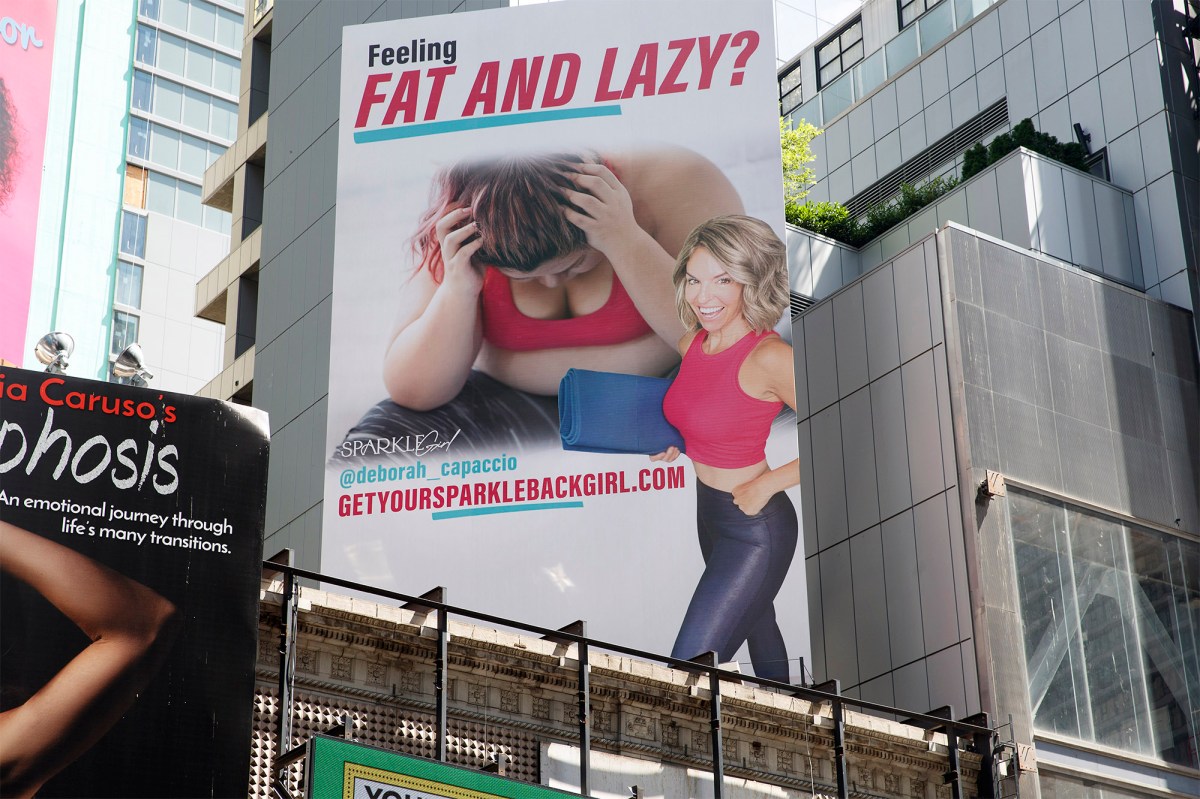 Prominently displayed in Times Square, among the customary ads for Hershey bars and H&M, a new billboard plugging an online program for fitness, weight loss and mindfulness has caused outrage among the woke of New York.

The controversial sign, on the southeast corner of West 48th Street and Seventh Avenue, shows a plus-size woman squeezed into workout gear sitting with her head in her hands.

Large letters above the despairing model ask: “Feeling fat and lazy?” The rhetorical question is being posed by self-styled “wellness motivator” Deborah Capaccio, whose trim figure appears on the promo, which directs you to GetYourSparkleBackGirl.com.

Actress and activist Jameela Jamil and influencer Matthew Anchel have blasted the 50-foot billboard as “blatantly fat phobic,” “toxic” and “triggering.” The vilification reached an extreme when thousands of their followers took to social media to attack Capaccio’s “prejudice” against people who are overweight or obese.

But their target remains defiant. Capaccio insists her unapologetic use of “fat” and “lazy” calls out “the silent epidemic that’s going on in women’s minds every day.” She wants them to address their “negative self-talk” — the criticisms they may subconsciously give themselves that perpetuate a sense of inadequacy — rather than just lose weight. The coach, who previously suffered from disordered eating herself, explained that she noticed striking similarities in the way all dieters think.

“We identified as fat and lazy, and those thoughts were sabotaging our efforts to feel good about ourselves and get healthy,” Capaccio told The Post, saying that the solution is to change your attitude toward yourself.

Despite such a confident call to action, the 50-year-old said she was disappointed by some of the reactions to her billboard — the placement of which cost her $13,000.

“I expected some backlash and was ready for it, especially the online abuse,” she said. “But I’m more disturbed by today’s culture where anything that causes discomfort or dissonance is considered taboo.”

Jamil, for one, cares little for Capaccio’s concerns. The 35-year-old recovered anorexic complained in recent Instagram and Twitter posts that the sign is an example of “fatphobia.” She dismissed the wording as “steeped in racism, ableism and classism,” and wrote that its “cruelty and offense to fat people” is “hate speech.”

The condemnation by the British star of NBC’s “The Good Place” has been liked by 114,000 of her 3.4 million followers on Instagram. Many call out Capaccio with comments like “Sizeism is the last acceptable prejudice” and “How are we supposed to bring up our daughters around this crap?”

Their sentiments are echoed by Anchel, who describes himself as “body positive.” He told The Post, “The billboard really pissed me off, especially in a city that is supposed to be the center of acceptance and open-mindedness.”

Recalling the moment he first spotted the sign, the professional opera singer said: “My jaw dropped and I thought, ‘Can you believe this?’ The messaging was so insulting and triggering. It didn’t belong in Times Square.”

The 300-pound, 6-foot-3 Upper West Sider immediately filed a complaint with the nonprofit Times Square Alliance (which failed to respond). He called for the billboard to be taken down and considered launching a petition for its removal.

Anchel, 34, who has 16,000 followers on Instagram, explained that he wants other people to be spared the shame he once experienced — and ultimately overcame — as a result of his size. He said: “I am a fat person who believes in fat liberation and can confidently say that fat is not a feeling.”

Undeterred, Capaccio believes Anchel, Jamil and their supporters have missed the point in a collective rush to judgment. She claimed her clients have benefited from the eight-module $1,000 regime, freeing them from self-criticism and rejecting fad diets. Cardio and weight training are part of the fitness program, and the average woman participant loses 30 pounds per year.

Meanwhile, Capaccio doesn’t regret spelling out the terms “fat” and “lazy” on her polarizing Times Square billboard. She concluded: “The words might be disruptive — but they’re designed to make you think.”

What do passers-by really think of the billboard? The Post asked people in Times Square how they feel about the “fat and lazy” sign.

“It’s OK — everyone should love themselves for who they are. If [Capaccio] is going to help people, then that’s a great thing.” — Bakery employee Denise Javier, 21, of Queens

“I don’t believe necessarily that laziness is related to weight. Maybe one person can be overweight but for different reasons, not because they are lazy or because they don’t feel like exercising.” — Tech worker Paola Saavedra, 25, of Bogota, Colombia

“This is body shaming. I don’t think we are now in a time when this can be acceptable. It’s telling people … their bodies aren’t right and unacceptable because you’re fat and you’re lazy. I’m not comfortable with this.” — Lawyer Maria Alejandra Vallejo, 25, of Bogota, Colombia

“It definitely impacts the viewer’s self-esteem. I don’t know what [Capaccio’s] intention is with this poster. Maybe she has the best intentions of holding people accountable for their actions, but that’s not the best way to put it.” — TV intern María Marta Guzmán, 21, of Jersey City

“[Capaccio] put up something that’s actually hurtful. People right now are judging their bodies so much and she’s profiting off that. It’s a trend: ‘Let me just profit off of people’s suffering, off people’s weakness and whatever people feel [when they say] “I’m not enough.”’” — Personal concierge Paloma Leon, 31, of The Bronx

“It doesn’t look that much different to me than any normal ‘Get off your couch and go exercise’ ad … I think people are making a bigger deal out of this than they need to. People are going to get offended by all sorts of different things. If Deborah Capaccio feels like she’s getting some business out of this, then she’s getting some business out of it, and that’s her prerogative … I wouldn’t put something like this up, though.” — Lindsey, 39, of Orange County, Calif., who works in marketing

Texas Is Tops In Helping People With Emergency Rental Assistance 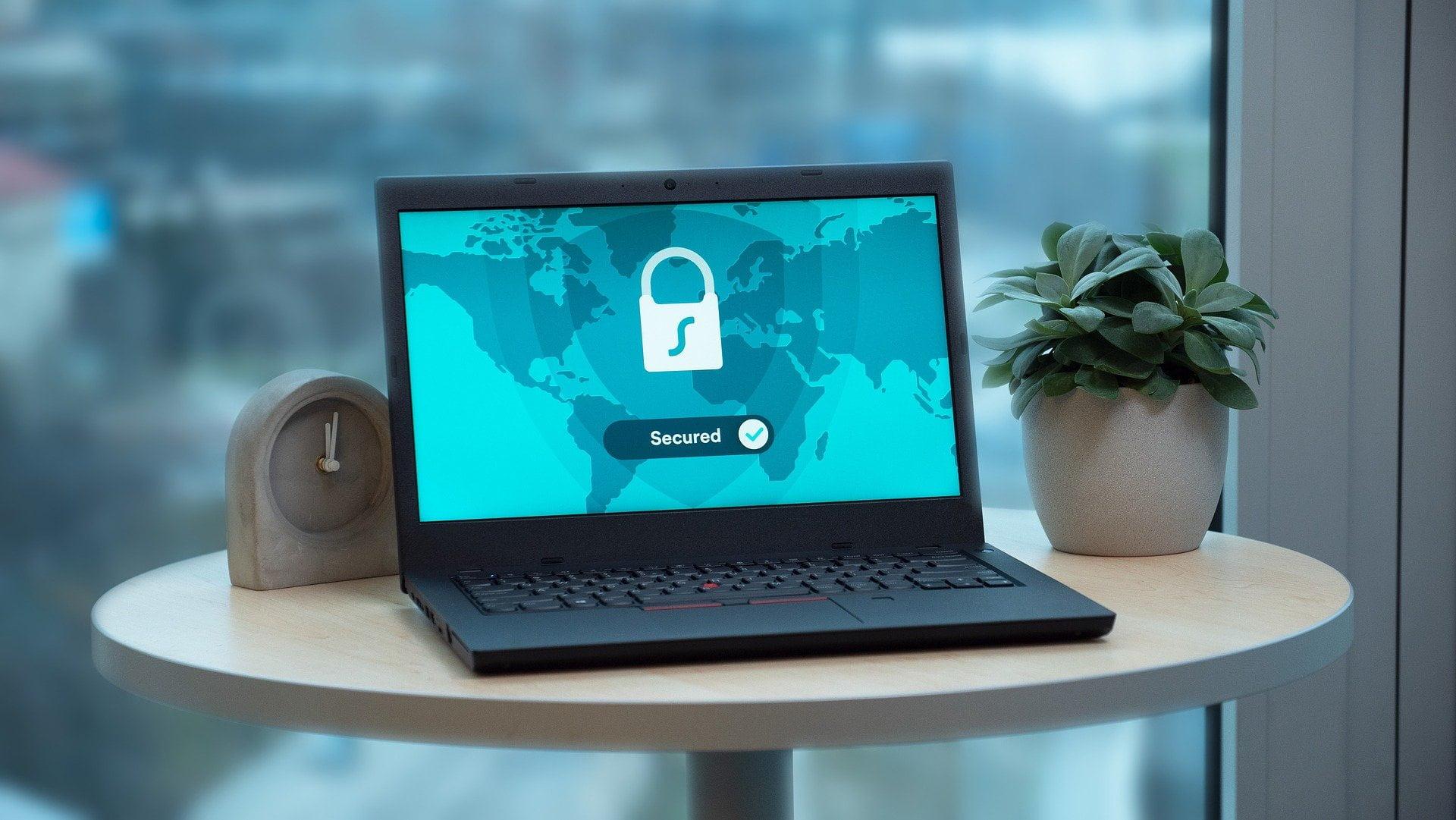 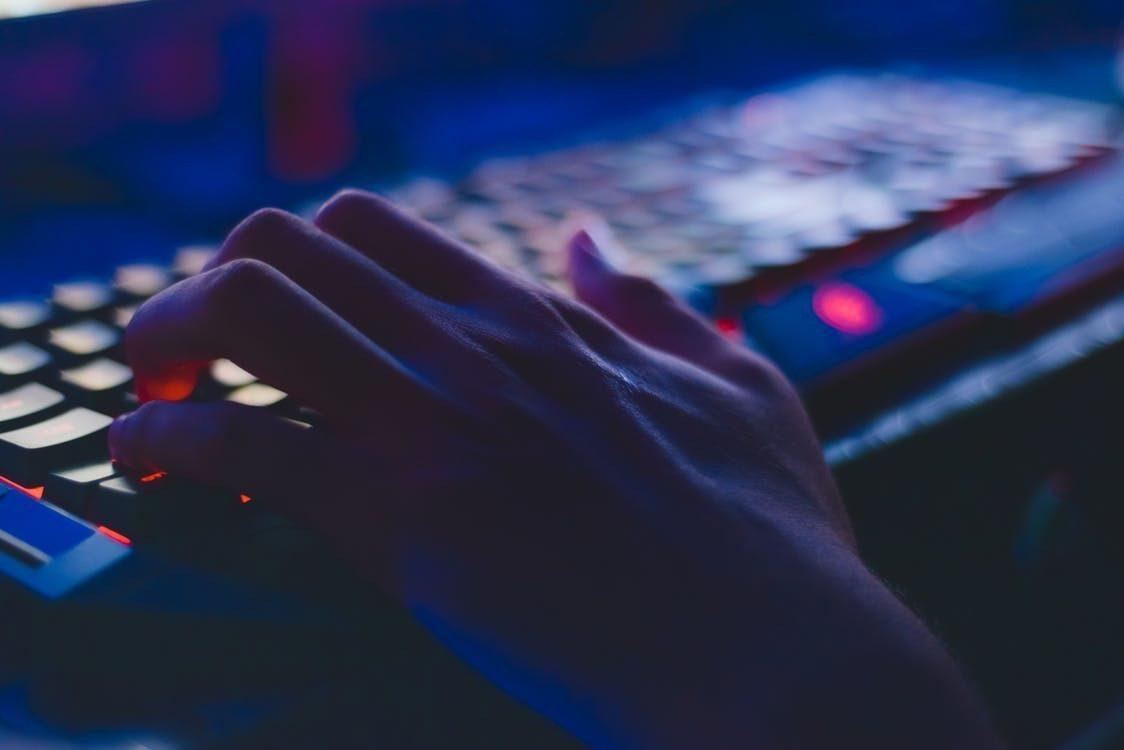 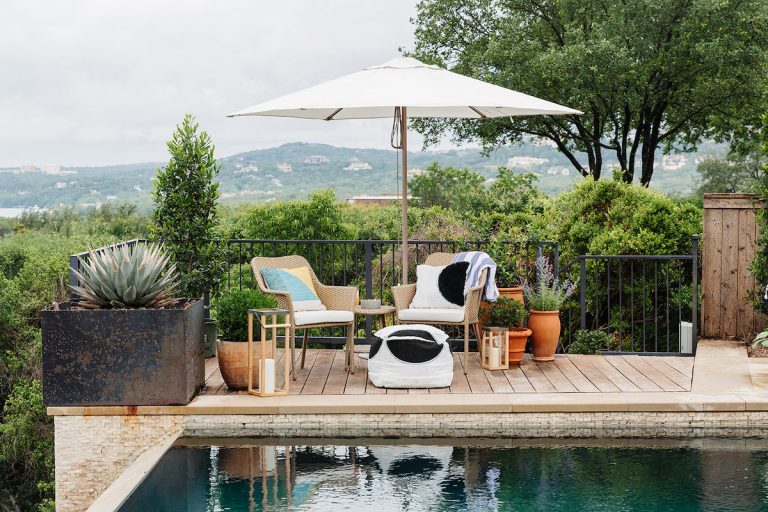 Texas Is Tops In Helping People With Emergency Rental Assistance