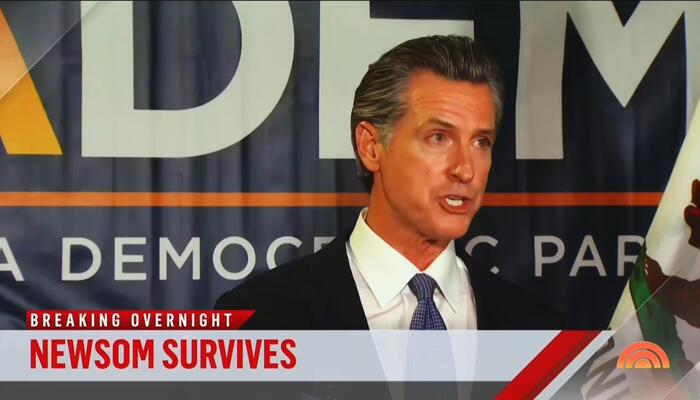 All three networks on Wednesday trumpeted Gavin Newsom surviving California’s recall election as a “resounding affirmation” and “vindication” for the Democrat’s policies. In contrast, media outlets in 2012 grumbled when conservative Governor Scott Walker defeated a union-backed attempt to remove him in Wisconsin, lamenting all the money spent.

On Wednesday, CBS Mornings journalist Major Garrett touted the California results: “The Governor told me he’d made mistakes. But now he has something other elected officials don’t have: vindication. This recall election in the end was a referendum on his pandemic policies and the result was a blowout.”

Garrett seemed to have no issue with the massive amount of money spent to save Newsom. He matter-of-factly explained: “Newsom raised about $70 million to fight the recall, roughly six times the total of conservative radio talk show host and GOP front-runner Larry Elder.”

On ABC’s Good Morning America, George Stephanopoulos opened the show by hyping, “Recall rejected. California governor Gavin Newsom survives the Republican-back attempt to kick him out of office.” Reporter Matt Gutman agreed: “The victory seemed a resounding affirmation of the Covid restrictions that led to the recall in the first place.”

Talking to Stephanopoulos, Gutman described a “lasting legacy” for the liberal governor as “Newsom’s strict Covid policies have worked and that, George, they have been popular.”

On NBC’s Today, co-host Savannah Guthrie declared the results as “being seen as a win for Democrats on the national stage heading into next year’s midterm elections.” Reporter Jacob Soboroff echoed his colleagues, repeating the Democrat’s talking points: “The Governor called it humbling, a validation of his leadership, allowing him to continue to lead the most populous state in the union.

This is a quite a contrast to the tantrum thrown by journalists when the people of Wisconsin rejected a recall of Walker. On the June 6, 2012 Nightly News, then-anchor Brian Williams contemptuously lectured that “money flowed into that state from all over the country, from people who had never been to Wisconsin, had no connection to Wisconsin.”

Unlike the lack of concern about money in 2021, Williams warned, “Part of the new and unlimited spending that is changing politics in a hurry.” Then-CBS Evening News anchor Scott Pelley complained, “The Wisconsin battle also was a preview of how much money is changing politics these days. Donations flooded into the state on both sides. The recall election may have cost more than $75 million, and about half of that came from outside Wisconsin. A lot of it from wealthy individuals.”

Unlike the response to Newsom, where journalists spun the results as possible good news for Democrats in the 2022 midterms, MSNBC host Lawrence O’Donnell on June 5, 2012, saw the recall failure as a win for… Barack Obama:

The contrast between 2012 and 2021 show that journalistic standards seem to be whatever is the current Democratic talking point of the day.

The hypocrisy and spin on CBS was sponsored by Progressive insurance, on ABC by Ford, on NBC by Xfinity.

Transcripts can be found below. Click “expand” to read more.

GAVIN NEWSOM: Democracy is not a football. You don’t throw it around.

KING: Talking about the California recall, we are, too. Welcome to CBS Mornings. That’s where we’re going to begin, in California where CBS News projects Governor Gavin Newsom has survived an attempt to recall him from office. So far more than 63 percent of voters say they want him to stay on as governor of their state rather than be replaced. Now the ballots are still being counted this hour. Major Garrett is in Sacramento with more on the story. Major, Good morning to you.

MAJOR GARRETT: Good morning, Gayle. Good morning, everyone from Sacramento. On Sunday in Los Angeles, I asked Governor Newsom if the recall election had taught him anything. He said every elected official who had to make decisions during the pandemic about lockdowns, vaccines, social distancing, schools, have been scrutinized and criticized. The Governor told me he’d made mistakes. But now he has something other elected officials don’t have: vindication. This recall election in the end was a referendum on his pandemic policies and the result was a blowout.

NEWSOM: No is not the only thing expressed tonight.

GARRETT: Governor Newsom decisively defeated a recall effort sparked in part by his lockdown and mandate approach in dealing with the pandemic.

GARRETT: Most voters said the governor’s policies were about right rather than too strict. And coronavirus was the most important issue for those voting to keep Newsom in office. Among those who voted to oust the governor, the economy and homelessness topped the list.  Newsom raised about $70 million to fight the recall, roughly six times the total of conservative radio talk show host and GOP front-runner Larry Elder.

LARRY ELDER: We recognize that we lost the battle, but we are certainly going to win the war.

GARRETT: That war could be California’s next gubernatorial election in just 14 months. A race that may again pit Elder against Newsom.

GARRETT: Newsom, who drew support from prominent Democrats, spent the homestretch of the campaign tying Elder to former president Donald Trump, a deeply unpopular figure in California, and it seems to have worked.

NEWSOM:  I’m humbled and grateful to the millions and millions of Californians that exercised their fundamental right to vote and expressed themselves so overwhelmingly by rejecting the division.

GARRETT: Elder had toyed with the idea of filing legal challenges against the recall results, arguing without any evidence whatsoever that fraud might tip the scales. Newsom’s landslide buried that notion. Elder said last night, “I lost,” and he urged his supporters to accept defeat graciously. Tony?

TONY DOKOUPIL: If you’re going to win, it helps to win by a lot. Thank you so much.

STEPHANOPOULOS: Now to that breaking news overnight in the California recall election. Governor Gavin Newsom beat back the attempt to be recalled. He’s keeping his job and Matt Gutman is in Orange county where they will continue to count the votes. Good morning, Matt.

MATT GUTMAN: Good morning. Until the past couple of weeks Newsom and his Republican rival were polling neck and neck but then the Democratic machine began rolling to fight this recall. And all of that changed. In fact, last night Newsom’s victory was so lopsided that the race was called barely half an hour after polls closed. This morning, four months after a grassroots Republican petition to remove him from office gained nearly unstoppable momentum and rattled the Democratic Party, Gavin Newsom is keeping his job as governor.

GAVIN NEWSOM: I’m humbled and grateful to the millions and millions of Californians that exercised their fundamental right to vote.

GUTMAN: The victory seemed a resounding affirmation of the Covid restrictions that led to the recall in the first place.

GUTMAN: It was also a resounding affirmation of Democratic power in California. Newsom raising $70 million in the past couple of months and enlisting the party’s biggest power brokers including Barack Obama and President Biden. The Republican-led effort costing California taxpayers nearly $300 million, but its lasting legacy may be the allegations of fraud before a single vote was counted.

Up until the past couple of weeks conservative radio host Larry Elder polling neck and neck with Newsom but last week with polls showing him down his campaign launched the Stop California Fraud website and claimed that he had lost to voter fraud before election day and late last night elder officially conceding but with a warning.

GUTMAN: And they’re likely to be two lasting legacies to this recall effort. The first is a possible Republican playbook to cry fraud when a campaign against a Democrat appears in doubt. The other is that Newsom’s strict covid policies have worked and that, George, they have been popular.

STEPHANOPOULOS: That was clearly on the ballot. Okay, Matt, thanks very much.

SAVANNAH GUTHRIE: We’re going to start this morning in California, this breaking news overnight. Governor Gavin Newsom holding on. He has survived another attempt to remove him from office in that recall election. It’s being seen as a win for Democrats on the national stage heading into next year’s midterm elections. NBC’s Jacob Soboroff joins us now from Sacramento. Jacob, good morning.

JACOB SOBOROFF: Savannah, good morning to you. Gavin Newsom’s going to go back to work right here at the California state capitol this morning after what NBC News projected was a decisive victory in that recall election. The governor called it humbling, a validation of his leadership, allowing him to continue to lead the most populous state in the union.

GOV. GAVIN NEWSOM [D-CA]: And thank you for rejecting this recall.

SOBOROFF: Overnight, Governor Gavin Newsom declaring victory, with California voters rejecting a months-long effort to remove him from office. Newsom calling the no vote a validation of his policy priorities.

SOBOROFF: The campaign was set against the backdrop of multiple crises in the Golden State – record wildfires, COVID, homelessness, and rising violent crime. But one year ahead of a scheduled gubernatorial election, Californians gave Newsom a vote of confidence.

SOBOROFF [TALKING TO GUTHRIE]: And on top of that, people are supportive of Governor Newsom’s policies, particularly around COVID, with masking and vaccine mandates. 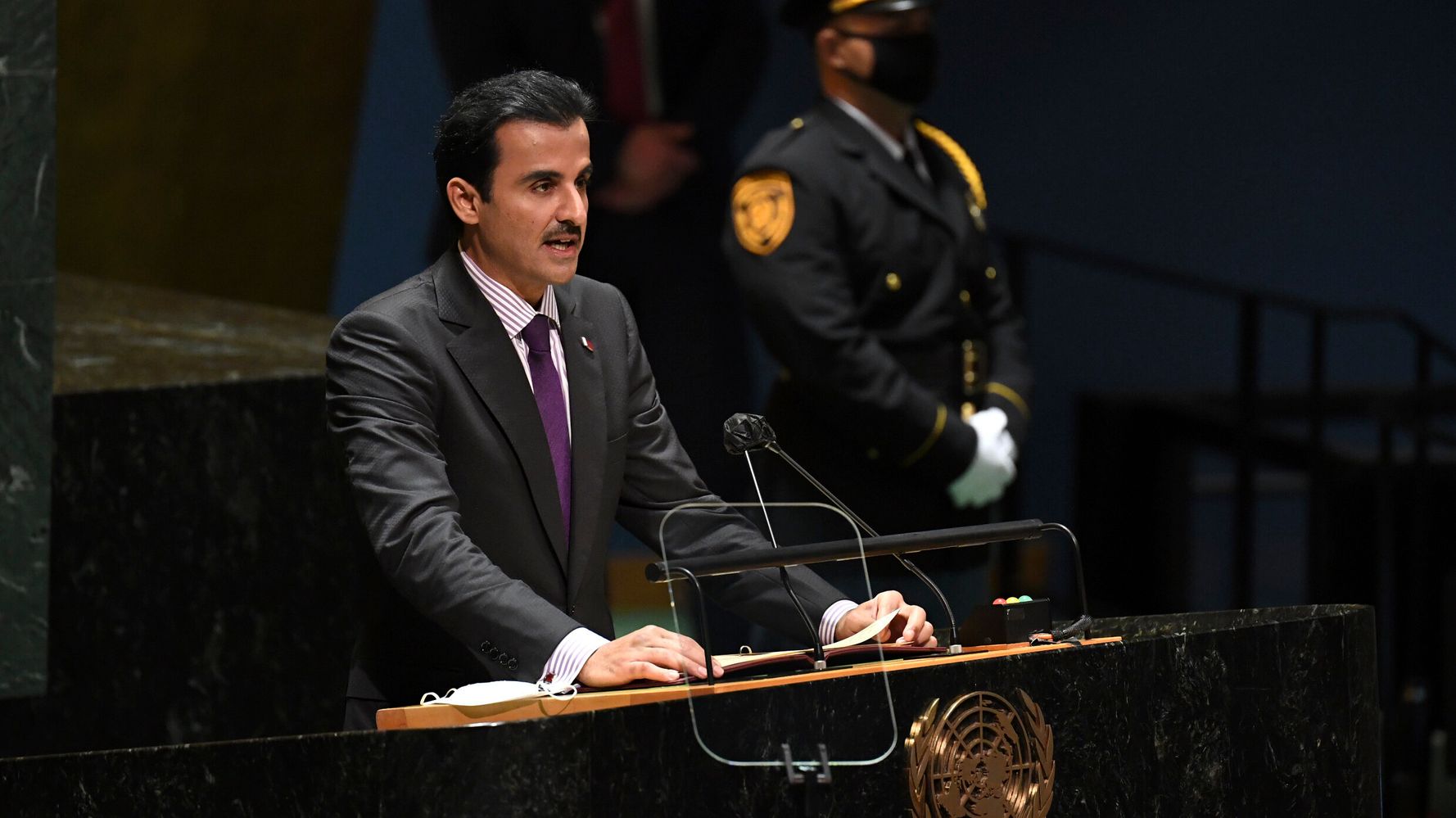