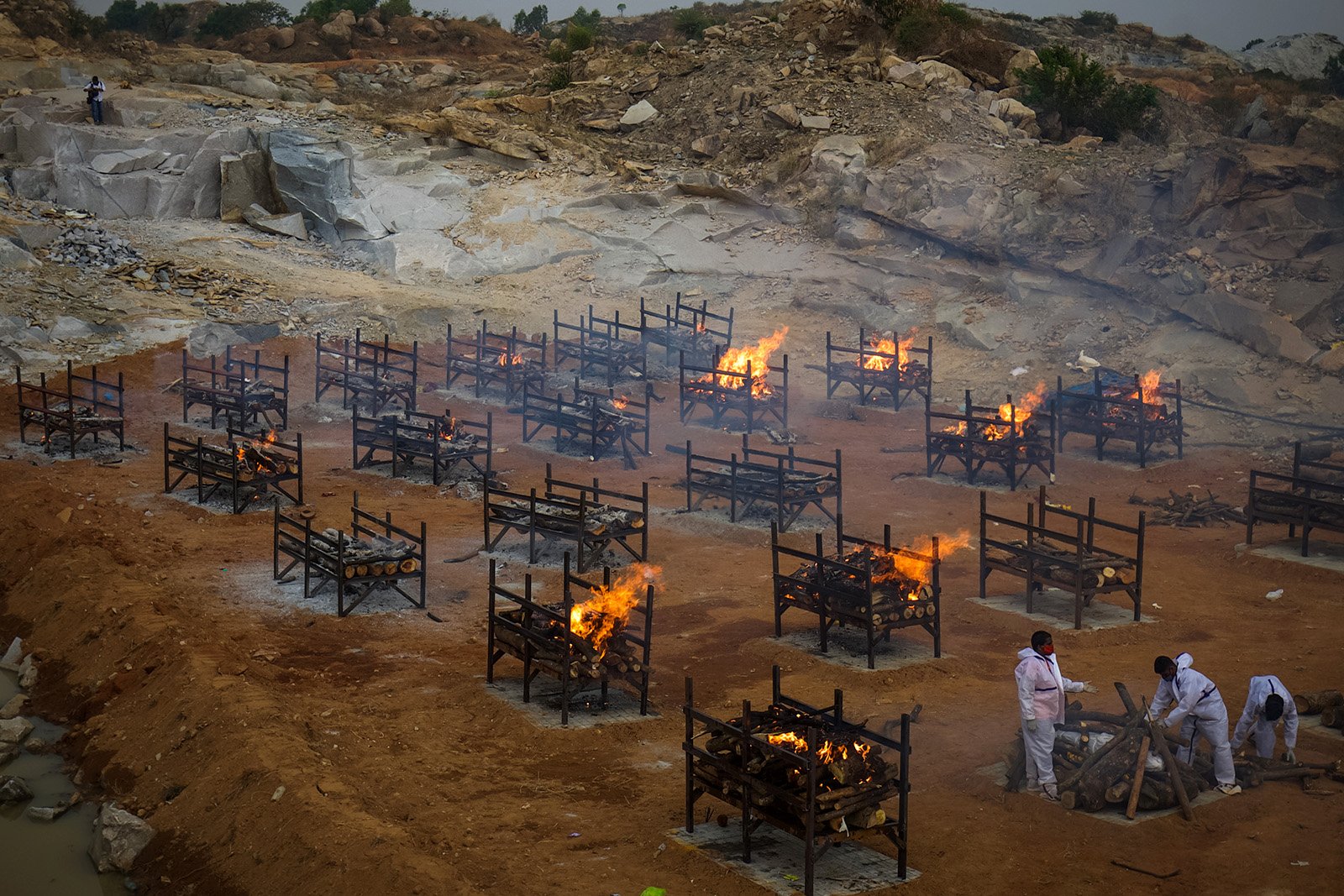 Mass cremations in the city of Bengaluru, India, due to the large number of COVID-19 deaths, April 30, 2021. (Photo by Abhishek Chinnappa/Getty Images)

(The Conversation) — In the past several weeks, the world has looked on in horror as the coronavirus rages across India. With hospitals running out of beds, oxygen and medicines, the official daily death toll has averaged around 3,000. Many claim that number could be an undercount; crematoriums and cemeteries have run out of space.

The majority of India’s population are Hindu, who favor cremation as a way of disposing of the body. But the Muslim population, which is close to 15%, favors burying its dead.

Generally, tradition holds that the body is to be cremated or buried as quickly as possible – within 24 hours for Hindus, Jains and Muslims, and within three days for Sikhs. This need for rapid disposal has also contributed to the current crisis.

Hundreds of families want their loved ones’ bodies cared for as quickly as possible, but there is a shortage of people who can do the funerals and last rites. This has led to a situation where people are paying bribes in order to get space or a furnace for cremation. There are also reports of physical fights, and intimidation. 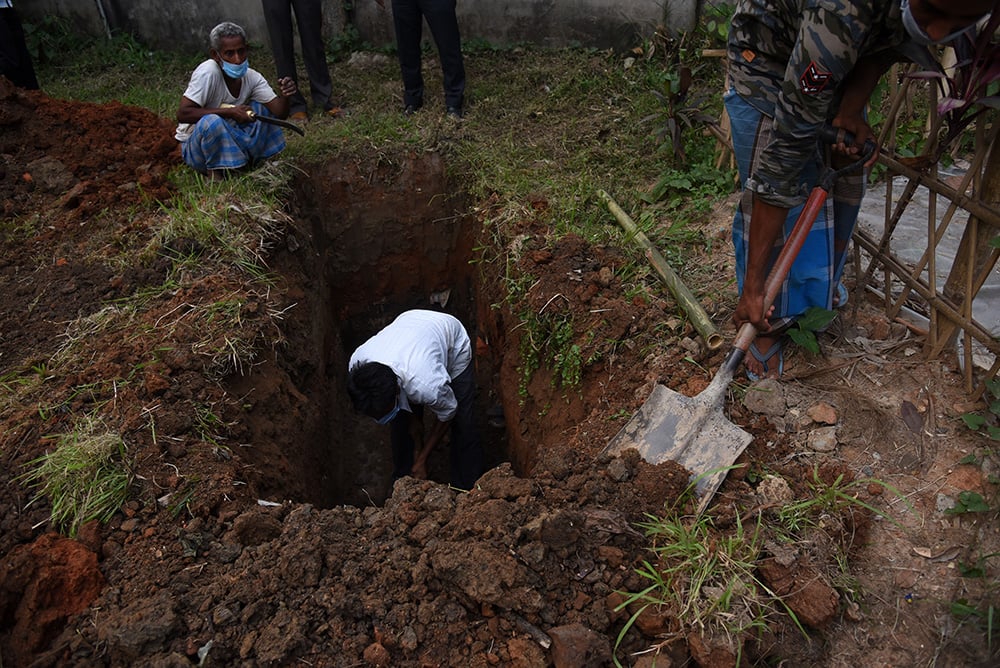 Workers digging as they prepare to bury the body of a person who died of COVID-19 in Guwahati, Assam, India, on April 26, 2021. (Photo by David Talukdar/NurPhoto via Getty Images)

As a scholar interested in the ways Asian societies tell stories about the afterlife and prepare the deceased for it, I argue that the coronavirus crisis represents an unprecedented cultural cataclysm that has forced the Indian culture to challenge the way it handles its dead.

Many Americans think of cremation happening within an enclosed, mechanized structure, but most Indian crematoriums, known as “shmashana” in Hindi, are open-air spaces with dozens of brick-and-mortar platforms upon which a body can be burned on a pyre made of wood.

Hindus and Sikhs will dispose of the remaining ashes in a river. Many shmashana are therefore built near the banks of a river to allow for easy access, but many well-off families often travel to a sacred city along the banks of the river Ganges, such as Hardiwar or Benares, for the final rituals. Jains – who have traditionally given significant consideration to humanity’s impact on the environmental world – bury the ashes as a means to return the body to the Earth and ensure they do not contribute to polluting rivers.

The workers who run shmashana often belong to the Dom ethnicity and have been doing this work for generations; they are lower caste and subsequently perceived as polluted for their intimate work with dead bodies.

The act of cremation has not always been without controversy. In the 19th century, British colonial officials viewed the Indian practice of cremation as barbaric and unhygienic. But they were unable to ban it given its pervasiveness.

However, Indians living in the United Kingdom, South Africa and Trinidad often had to fight for the right to cremate the dead in accordance with religious rituals because of the mistaken and often racist belief that cremation was primitive, alien and evironmentally polluting.

Rituals and a long history

The earliest writings on Indian funerary rituals can be found in the Rig Veda – a Hindu religious scripture orally composed thousands of years ago, potentially as early as 2000 B.C. In the Rig Veda, a hymn, traditionally recited by a priest or an adult male, urges Agni, the Vedic god of fire, to “carry this man to the world of those who have done good deeds.”

From the perspective of Hindu, Jain, and Sikh rituals, the act of cremation is seen as a sacrifice, a final breaking of the ties between the body and the spirit so it may be free to reincarnate. The body is traditionally bathed, anointed, and carefully wrapped in white cloth at home, then carried ceremonially, in a procession, by the local community to the cremation grounds.

While Hindus and Sikhs often decorate the body with flowers, Jains avoid natural flowers for concern of inadvertently destroying the lives of insects that may be hidden within its petals. In all of these faiths, a priest or male member of the family recites prayers. It is traditionally the eldest son of the deceased who lights the funerary pyre; women do not go to the cremation ground. Family members perform rituals at a crematorium for a person who died of the coronavirus in Ghazipur, India, on May 1, 2021. (Photo by Sajjad Hussain/AFP via Getty Images)

After the ceremony, mourners return home to bathe themselves and remove what they regard as the inauspicious energy that surrounds the cremation grounds. Communities host a variety of postmortem rituals, including scriptural recitations and symbolic meals, and in some Hindu communities the sons or male members of household will shave their head as a sign of their bereavement. During this mourning period, lasting from 10 to 13 days, the family performs scriptural recitations and prayers in honor of their deceased loved one.

The changing times of COVID-19

The wave of death from the COVID-19 pandemic has forced transformations to these long-established religious rituals. Makeshift crematoriums are being constructed in the parking lots of hospitals and in city parks.

Young women may be the only ones available to light the funerary pyre, which was previously not permissible. Families in quarantine are forced to use WhatsApp and other video software to visually identify the body and recite digital funerary rites.

Media reports have pointed out how in some cases, crematorium workers have been asked to read prayers traditionally reserved for Brahmin priests or people from a higher caste. Muslim burial grounds have begun to run out of space and are tearing up parking lots to bury more bodies.

The work of the dead

While other important rituals such as marriage and baptism may take on a new appearance in response to cultural changes, social media conversations or economic opportunities, funerary rituals change slowly.

Historian Thomas Laqueur has written on what he calls “the work of the dead” – the ways in which the bodies of the deceased participate in the social worlds and political realities of the living.

ARCHIVE: In the midst of deep grief, a scholar writes how Hindu rituals taught her to let go

In India’s coronavirus pandemic, the dead are announcing the health crisis that the country believed it had conquered. As recently as April 18, 2021, India’s Prime Minister Narendra Modi was holding crowded political rallies, and his government allowed the massive Hindu pilgrimage festival of Kumbh Mela to proceed a year early in response to the auspicious forecasts of astrologers. Authorities began to act only when the deaths became impossible to ignore. But even then, the Indian government appeared more concerned about removing social media posts that were critical of its functioning.

India is one of the world’s largest vaccine-producing nations, and yet it was unable to make or even purchase the needed vaccines to protect its population.

The dead have important stories to tell about neglect, mismanagement or even our global interdependence – if we care to listen.

(Natasha Mikles is a lecturer in philosophy, Texas State University This article is republished from The Conversation under a Creative Commons license. The views expressed in this commentary do not necessarily reflect those of Religion News Service.)