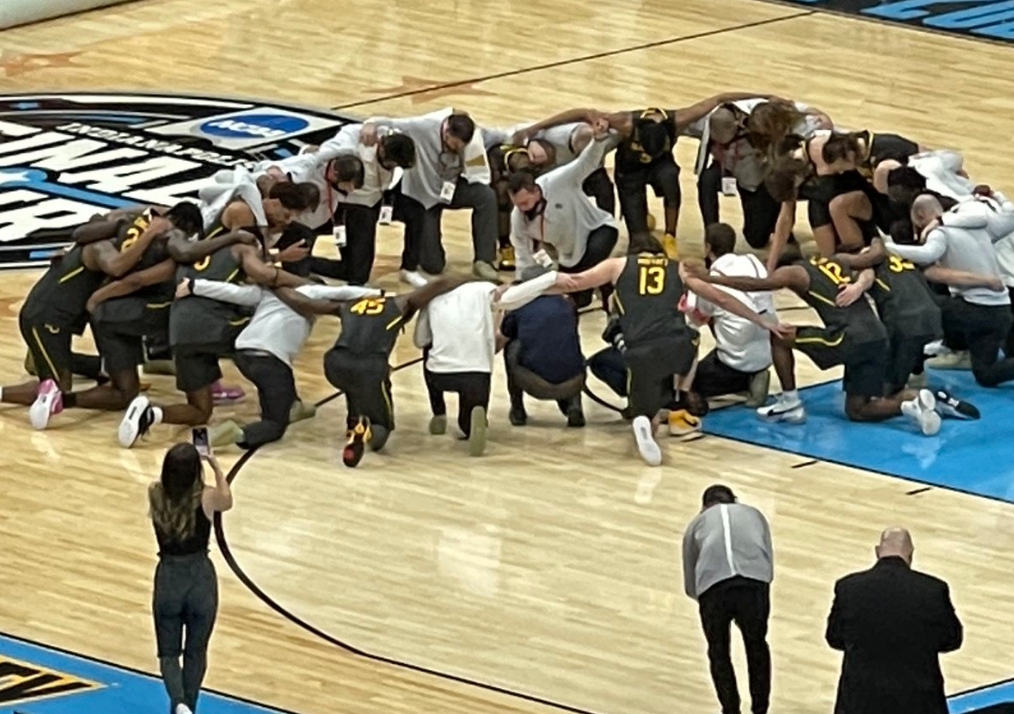 If you wanted to find the faith facts, you could look — of course — in the conservative and faith-defined media — like this highly detailed and valid Baptist Press report. You knew that GetReligionista Clemente Lisi would cover the basics at Religion Unplugged.

Then you had all of the God-talk and images surrounding the championship itself. The religious-market Sports Spectrum site rounded up the basics.

Within moments of securing the championship, Baylor’s entire team stopped to gather into a circle on the court. They gave God thanks in prayer.

Moments later, the team was presented with the 2021 national championship trophy. When answering questions from Jim Nantz of CBS, head coach Scott Drew talked about the team’s culture.

Coach Drew elaborated in his postgame press conference. He began the session by saying, “First and foremost, I want to thank God for blessing us with this opportunity tonight. I know the guys have worked really hard, so happy they get a chance to celebrate now.”

He was later asked more about that culture.

“A lot of joy in the locker room for sure,” he said. “But our joy is Jesus, Others, Yourself. It’s so tough to put other people in front of you and teams that do that are obviously more successful. Our guys, their love for each other [is] because they spend so much time working on their craft together, and they put in the time.

“Credit our assistant coaches for doing an incredible job bringing in high-character kids that want to be great teammates and want to work hard and want to improve. They deserve all that they’re getting.”

There’s another angle. Why are some of these players — often overlooked prospects that other Power 5 schools didn’t want — at Baylor? I am sure that they are not all angels, all of the time, but it’s clear that Christian faith motivated lots of them to move to Waco.

If news consumers were looking for totally faith-free coverage, the New York Times (#DUH) was the obvious place to start. The main story, come to think of it, didn’t even MENTION Baylor for the first 100-plus words.

There was this one tiny prayer detail in a paragraph about the friendship between Drew and Gonzaga coach Mark Few:

The two coaches, Drew and Few, have a deep connection. Baylor has two assistants who have worked or played for Few; Gonzaga has one who has worked for Drew’s brother, Bryce. The coaches are avid fishermen — “he’s the king of fly fishing; I think I’m king of the bass fishing,” Drew said — and have teamed up as pickle ball partners during their time in Indianapolis, sending text messages to each other with a prayer and good luck wishes before each game here.

As usual, the USA Today piece picked up in my local Knoxville newspaper (“Baylor’s Scott Drew is forever a national champion; his doubters look foolish”) was equally faith-free. You can see a hint of that in this summary paragraph:

“To me, (winning a championship) never defines a great coach,” Drew said. “Just like there’s so many players, NBA players who never won an NBA championship and great college players that never went to a Final Four. I value coaches. Do they make their players better spiritually, academically, character-wise? Are you preparing them for life?”

But the biggest disappointment, for me, was the long, detailed and otherwise insightful profile of Drew at TheAthletic.com, one of my absolutely favorite journalism websites. Here’s the headline: “Baylor’s NCAA title run is Scott Drew’s masterpiece, an 18-year rise from basketball ruin.”

Here is a long chunk of that story, for those without a subscription to this must-read website:

It does not seem possible that someone could happy a program out of the bowels of a scandal, or that optimism could be an effective coaching tool. As Drew now stands atop the college basketball world, a net draped around his neck and a championship trophy in his possession, he is here to tell you differently. Joy can win. Other coaches have built programs out of nothingness — Few, for one, turned a small Catholic school in Eastern Washington from Cinderella to belle of the ball — but no one in college basketball, maybe in all of college sports, has done what Drew has done. In five years, he took the Bears to the NCAA Tournament, and in Year 8 to within seven points of the Final Four.

His story, Baylor’s story, is a stunning reversal that required all of the usual tools — administrative support, mining for players, game-planning and perseverance — but it also specifically needed Drew. Friends and colleagues told the then 33-year-old he was committing career suicide when he alit for Waco, but his father told him otherwise.”There was only one direction to go, and that was up,’’ says Homer Drew, the former Valparaiso coach. Typically as hokey and hopeful as his son, Homer did, on this occasion, also arm his son with some very practical advice, encouraging Scott to get a long-term contract that gave him the time he would need to build. The family hired a lawyer and worked out a six-year deal that didn’t even start until after any NCAA sanctions ended. “My first contract at Valpo was one page,” Homer says. “His was 26.’’

The fact is, Baylor needed Drew, and not just because he could X and O, and recruit. The program required a person with vision, yes, but also someone who unashamedly would cloud his vision with rose-colored glasses.

Was this partnership just about rose-colored glasses? Maybe there another word that could have been used next to “perseverance”?

Later, there was a simple explanation of that JOY concept that Drew talks about All. The. Time.

The players kept waiting for Drew to change, to drop the charade and start dog-cussing them when they lost, or even cutting bait when everyone realized how steep the climb was.

Instead, they were buoyed by Drew’s enthusiasm, the Bears beginning to understand both his concept of JOY — Jesus, Others, Yourself — and the more ordinary version, the one where you take pleasure where you can find it.

Is that an essential fact in this story or not? If that’s crucial to Drew, his family, his players and to his employers, then why isn’t it an important fact in basic, fact-driven news reporting?

Is it the whole story? Of course not. That piece at The Athletic is packed with great reporting. Why not include the religion angle in there with the other important themes and images?

This Lawmaker Wants To Label Foreign White Supremacist Groups As “Terrorists.” But Some Of Them No Longer Exist.