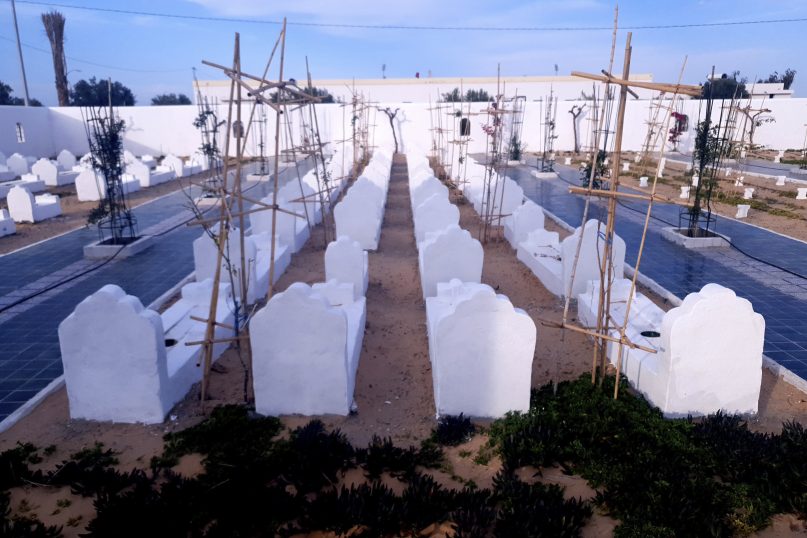 ZARZIS, Tunisia (AP) — Most of the headstones have dates but no names. Row after row of palest white, practically gleaming in the Mediterranean sun.

The cemetery in Zarzis is nearly exactly as Rachid Koraïchi pictured it when he sketched his vision of the “Garden of Africa” that would be the final resting place for hundreds of anonymous men, women and children whose bodies have washed up on the shores of this coastal Tunisian city in recent years.

For him, it was a duty “to make a burial ground, one with presence and intelligence, so that one day the families, the fathers, the mothers, the tribes and the countries know that their children are in a heavenly place, the first step to heaven,” Koraïchi told The Associated Press.

Zarzis is a port city where migrants bound for Europe frequently wind up after their boats go astray in the Mediterranean’s uncertain currents. One of its cemeteries is already filled with those who died trying to make the crossing. Zarzis residents refused to bury migrants in the local Muslim cemeteries.

So Koraïchi decided that the newly dead needed their own burial ground and he bought a plot of land in honor of his brother, who himself drowned in the Mediterranean while trying to migrate to Europe. “They died in the same waters, they died in the same sea and were taken by the same salt,” he said.

His cemetery officially opened June 9 with a plan for 600 graves, but he had already been accepting bodies since 2019, soon after he bought the land. It is already one-third full. Koraïchi pays for the burials out of his own pocket.

He planted a small garden in the midst of an olive orchard, dotted with pomegranate trees and fragrant jasmine and interspersed with glazed tiles and winding walkways.

In all, around 600 sets of remains are interred in the two cemeteries for migrants. Only three have names.

“For too long, humanity has shown its powerlessness, even indifference, when men and women drown and there are too many who look away,” Audrey Azoulay, UNESCO’s director general, said on a visit to the region June 9 to donate a statue to the cemetery.

As for the belongings that wash up in Zarzis after the shipwrecks, many of them are collected in a nearby museum. Clothes, toys, scraps of identity documents — in all more than 125,000 shards of lives lost trying to reach Europe over more than two decades.

Mohsen Lihidheb, the museum’s founder, is particularly troubled by the shoes, worn over months and years of walking.

“These are the shoes used during the crossing of the Libyan desert which was not easy,” he said. “They did not manage to get new shoes in the rich countries, but died in the sea wearing these shoes.”

Since the beginning of this year, 677 people have died on the stretch of central Mediterranean coastline from Libya into Tunisia trying to reach Europe, according to the International Organization for Migration. That figure has risen considerably since last year’s slowdown in migration due to the pandemic, despite Europe’s efforts to block departures.

Save 31% on the JBL Boombox waterproof speaker on Prime Day Save 31% on the JBL Boombox waterproof speaker on Prime Day