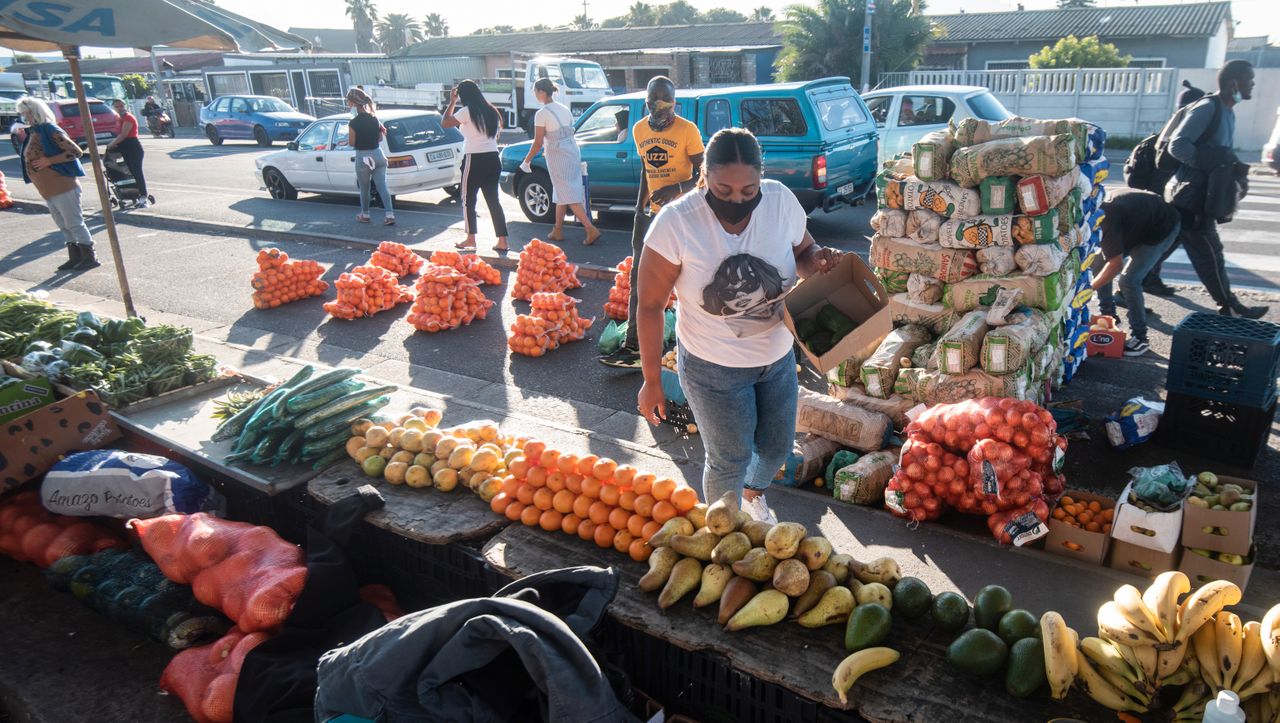 
For our Global Societies project, reporters around the world will be writing about societal problems, sustainability and development in Asia, Africa, Latin America and Europe. The series will include features, analyses, photo essays, videos and podcasts looking behind the curtain of globalization. The project is generously funded by the Bill & Melinda Gates Foundation.


Michelle Davids has largely cut vegetables from her family’s diet. She doesn’t buy any fruit anymore either, it’s too expensive. “Meat is completely out of the question,” she says. She used to splurge on a barbecue for her family twice a month. “Now, that’s a possibility maybe once every three months,” says Davids, a 32-year-old police officer from Cape Town, South Africa.

Instead of “normal chicken,” she now buys reconstituted meat. “I know vegetables would be healthier,” Davids says. But if she has to choose between an avocado and a loaf of bread, she’ll take the latter, plus some cheap peanut butter. “At least that fills us up for a few days,” she says. Powdered milk for her two-year-old daughter is also no longer affordable.

Michelle Davids, a policewoman in Cape Town, can no longer afford to feed her family vegetables.

The pandemic has radically changed the family’s life. Davids’ husband lost his well-paid job guiding tourists through Cape Town, and with only one source of income remaining, the family had no choice but to move back in with Davids’ parents, along with their two daughters, Kenya, 2, and Cassidy, 14. Now the four of them live in single room in the low-income suburb of Sea Winds. Still, says Davids, a sturdy woman with kind eyes, she’s grateful that her police job is secure.

The story of the Davids family could be retold millions of times around the world. The beginning of the pandemic translated into the end of income for huge numbers of people, especially in emerging and developing countries. At the same time, food prices have risen dramatically. It is a worrying combination, and one that experts are keeping an eye on. One of the United Nations’ most important development goals is that of eliminating hunger in the world by 2030, but the pandemic has pushed that goal further into the future.

The situation “is setting us back a full decade,” says Ervin Prifti, an economic analyst at the International Monetary Fund (IMF). Together with two colleagues, Prifti has analyzed past data and determined that economic growth is the key factor for reducing malnutrition and real income losses lead to hunger.

According to their analysis, over 60 million additional people worldwide could potentially have slipped into a state of malnutrition or hunger in 2020 alone. Other estimates put the number as high as 130 million. Prifti’s team warns that food insecurity is “one of the most dramatic collateral damages of the current pandemic.”

Even before the COVID-19 crisis, 680 million people were suffering from inadequate nutrition. Seven African countries – including South Sudan, Nigeria, the Democratic Republic of Congo and Ethiopia – in addition to Syria and Yemen in the Middle East – have been especially hard hit, as have Haiti and Afghanistan. A new report from the aid agency Oxfam shows that the number of people facing severe hunger around the world has increased sixfold from the end of 2019 to June 2021. “Conflict regions continue to be at the highest risk of a hunger crisis,” according to Moniko Tothova, an economist with the Food and Agriculture Organization of the United Nations (FAO).

But now the problem threatens to spread massively, with dramatic consequences. Malnutrition can lead to social unrest in the short term, Prifti says. And on the long-term, reduced productivity is a potential consequence, as are limitations on development for people and countries.

The FAO’s Food Price Index increased by 31 percentage points between March 2020 and June 2021. Although this represents the average price importers have to pay – and not retail prices – the increase for staple foods is reflected in the world’s supermarkets and market stalls. South Africans, for example, now have to spend 30 percent more for tomatoes, vegetable oils and beans than they did a year ago. In Brazil, people are complaining about the rising price of beef, chicken and rice, and in India, the traditional dal soup is now considerably more expensive.

The rise in food prices began before the COVID-19 crisis, as IMF analysts point out in a blog post. But at the beginning of the pandemic, lockdowns, food hoarding and export stops for rice and wheat disrupted supply chains and led to price increases.

And then there are the increased prices for transportation, which also impact consumer prices. The cost of transporting freight by ship has more than doubled in the last 12 months and many passenger flights, which were also used to carry food, have been eliminated. A rise in gasoline prices and the emergence of regional shortages of truck drivers has also made road transport pricier.

A food market in Lagos, Nigeria: “We expect further food price increases in the coming months.”

Meanwhile, demand for agricultural commodities has remained high, partly because China decided to fill up its stores and, for instance, buy up large quantities of soybeans. An increased demand for biodiesel has also pushed up the price for vegetable oils.

At the same time, extreme weather disrupted palm oil production in Indonesia, for example, and other climate phenomena have produced droughts and poorer harvests in many export-heavy countries, like Brazil and Argentina, as well as in Russia, Ukraine and the United States.

The latter factors have so far mainly affected the price producers can charge for their goods, which has risen by over 40 percent. “However, this development is only trickles down to consumers in part, and only gradually, and so far has barely become apparent,” says Prifti. “So we expect further food price increases in the coming months.”

Food inflation is not the same in all areas of the world. Developing and threshold countries tend to be hit much harder, particularly when they are heavily dependent on imports.

Whereas local production remained relatively constant, since agricultural workers tended to be excepted from quarantine rules, according to FAO economist Tothova, the lockdowns did have a significant effect on supply chains and local transportation. That led to shortages, which resulted in price increases for fruit, vegetables and cereals. Many street vendors were unable to work for extended periods, markets closed down and people had to do their shopping in expensive supermarkets.

As a result, prices in sub-Saharan Africa rose up to 200 percent in some areas. Famine is now looming “because incomes have collapsed at the same time,” Tothova says. The continent is also experiencing a third wave of COVID-19.

The situation is especially critical in several countries in the Global South and the Middle East, such as Nigeria and Lebanon, where economic crises are colliding with hyperinflation and currency devaluations, which make food imports more expensive. This is likely to cause further problems in the coming months, especially in sub-Saharan Africa, the Middle East and North Africa, which heavily rely on these imports.

A soup kitchen for the needy in Sao Paulo.

To cushion the food shock and its consequences, Prifti’s team of IMF researchers believes that increased government spending in the form of financial support for the poorest would be appropriate. It’s generally not the case that food is in short supply, it’s just that people cannot afford it, Prifti says. Many countries implemented a form of unconditional basic income in the crisis.

Brazil, for example, paid out emergency aid to people in need during 2020. South Africa had a similar program, in which the poorest residents received 350 rand ($25), but that has since been discontinued. “What pains me the most is that many countries here simply don’t have the financial means to set up programs like these,” says Shilobo, the South African agricultural economist.

Despite her own hardships, Davids, the police officer in Cape Town, has started a small aid program for needy children in the neighborhood. Every Monday, Wednesday and Thursday, she gives out food in front of her house to up to 150 hungry children lining up with Tupperware they’ve brought from home. Davids solicits donations on Facebook, and from that she buys chicken, bread, whatever is cheap. “I do what I can,” she says, “but sometimes it just gets to be too much.”

This piece is part of the Global Societies series. The project runs for three years and is funded by the Bill & Melinda Gates Foundation.

The Global Societies series involves journalists reporting in Asia, Africa, Latin America and Europe on injustices, societal challenges and sustainable development in a globalized world. A selection of the features, analyses, photo essays, videos and podcasts, which originally appear in DER SPIEGEL’s Foreign Desk section, will also appear in the Global Societies section of DER SPIEGEL International. The project is initially scheduled to run for three years and receives financial support from the Bill & Melinda Gates Foundation.

The Bill & Melinda Gates Foundation (BMGF) is funding the project for a period of three years at a total cost of around €2.3 million.

No. The foundation exerts no influence whatsoever on the stories and other elements that appear in the series.

Yes. Large European media outlets like the Guardian and El País have similar sections on their websites — called “Global Development” and “Planeta Futuro,” respectively — that are likewise funded by the Bill & Melinda Gates Foundation.

In recent years, DER SPIEGEL has complete two projects with the support of the Bill & Melinda Gates Foundation and the European Journalism Centre (EJC): “Expedition BeyondTomorrow,” about global sustainability goals, and the journalist refugee project “The New Arrivals,” which resulted in several award-winning features.