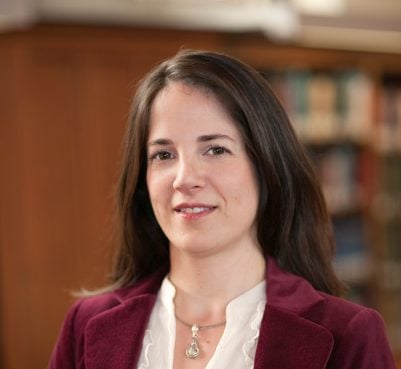 When biblical scholar Esther Hamori read about the killing of 18-year-old Michael Brown by a white police officer in 2014, she was struck by certain elements of the officer’s testimony.

“I tried to hold his right arm,” officer Darren Wilson told the grand jury. “And when I grabbed him, the only way I can describe it is I felt like a five-year-old holding on to Hulk Hogan . . . Hulk Hogan, that’s just how big he felt and how small I felt just from grasping his arm.”

The two men were within an inch of the same height, but Wilson kept emphasizing how gigantic Brown was, how his face looked “like a demon.”

In other words, Wilson made Brown out to be a monster.

Monsterization is nothing new, says Hamori, an associate professor of Hebrew Bible at Union Theological Seminary in New York. In fact, it’s right there in the pages of the Bible.  In both the Hebrew Bible and the New Testament, “violence is baked in, through and through,” and may make its readers more likely to countenance violence today.

“Certain ways of reading the Bible can lead to an acceptance, even an embrace, of authoritarian violence and police brutality,” said Hamori in an RNS interview.

Hamori’s research focuses on the many, many monsters of the Bible, some of which are hiding in plain sight. We just don’t remember they’re monsters because some of them have been tamed beyond recognition. Cute, wee baby cherubs with plump and rosy cheeks? You’re not going to find those in the Bible.

The terrifying cherubim in the Bible bear little resemblance to these adorable creatures, made famous by Raphael in the 16th century. Source: Wikimedia Commons, https://commons.wikimedia.org/wiki/File:Raffaels_Angels.jpg.

In fact, you had better not try to pinch those adorable cheeks, because the cherubim in the Bible are “terrifying hybrid guardian monsters,” says Hamori. (Strangers have told Hamori that her son is a little cherub. As compliments go, she finds this hilariously appalling, because in the original texts that’s not a compliment.)

In the book of Ezekiel, for instance, the cherubim help a divine executioner hurl down burning coal to destroy the city of Jerusalem. And in the New Testament book of Revelation, “a next-generation cherub helps the angels destroy huge portions of the earth’s population by handing over bowls of plague.” Cherubim are not our friends, even though they’ve been infantilized and made safe in the popular imagination.

That taming of the cherubim, who have journeyed from being God’s terrifying bodyguards to gracing the covers of Hallmark Valentine’s cards, is no accident, says Hamori. We need to domesticate these creatures, because when we actually read the Bible we discover that they’re not only bizarre and frightening, but also out to get us.

Another monster that’s been housebroken are angels. In our Christmas carols and It’s a Wonderful Life renditions, angels are sweet and good; they’re on our side.

In the Bible, God sometimes sends them to assassinate us.

“Angels are not cute, they’re not beautiful,” Hamori said. “They’re freaking terrifying. And they’re supposed to be, because that’s their job.” In the Bible, angels reap people, or drag them to hell, or kill 70,000 innocent civilians in one fell swoop. Or, in another story, they slaughter 185,000 people in their sleep.

That’s the key thing about the Bible’s monsters, according to Hamori: They’re doing this on God’s command.

“What’s so disconcerting about monsters is that while we might like to think of God slaying a sea monster here or there, overwhelmingly God doesn’t fight the monsters; he deploys them. Against us!”

Some people go to great lengths to try to explain these stories away, or claim that “they’re only in the Old Testament” (they’re not; read Revelation, for a start, followed by Matthew and Thessalonians). Others accept the stories at face value, which Hamori says is dangerous.

“What’s been on my mind lately is that we’re left with the Bible’s legacy of the sanctification of violence, and culturally, we need to reckon with that. And part of what I think is valuable about taking a good, hard look at God’s violent use of monsters against humankind in the Bible is that it helps us not to read the Bible as a monolith.”

This is what she tries to teach her students, that it’s “not a matter of accepting or rejecting the Bible wholesale. It’s a matter of figuring out what you think the value of the Bible is.” It’s a rich collection of voices, and readers aren’t required to get on board with all of them.”

If they do accept all this violence as not only tolerable but actually a model for us—remember, it’s God who sends the assassin monsters to kill humans in the Bible—the consequences can be far-reaching and dangerous.

“When people read the Bible as a monolith, as a go-and-do-likewise manual, then it’s a recipe for authoritarian violence,” said Hamori. “If God can use an angel to bring about the gruesome death of a king he doesn’t like, then of course you’re going to see Christian nationalist signs on January 6 at Capitol Hill. It becomes holy, or righteous, to assault those you see as ‘ungodly.’”

When the Bible doesn’t make sense

Rob Bell takes back the Bible

Note: Jana Riess is Esther Hamori’s editor for a forthcoming book about monsters in the Bible.