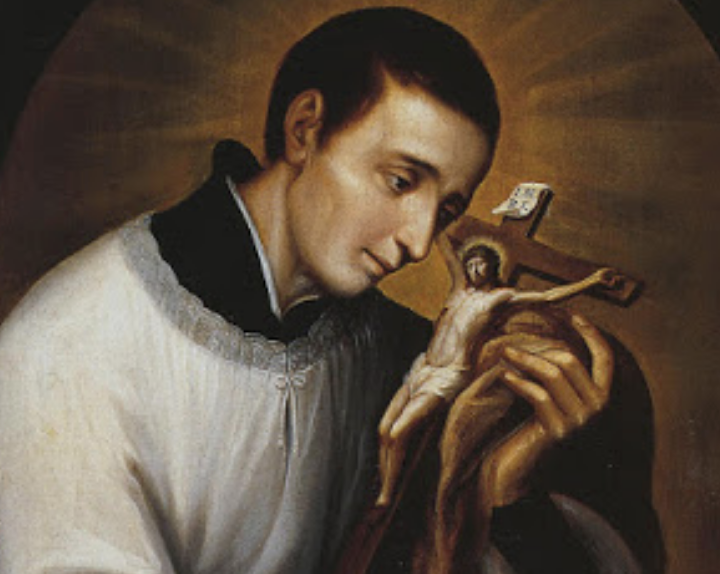 EDITOR’S NOTE: Religion news during the Final Four? Well, the final game will pit Texas vs. California, no matter what. That has culture wars implications. But the game hoops junkies want is Gonzaga vs. Baylor, the Jesuits vs. the Texas Baptists. Enough said. But what about a religion story with a pandemic hook? Clemente Lisi found one.

A stroll through the European paintings gallery at the Metropolitan Museum of Art in New York City brings you face-to-face with dozens of masterpieces. Among them is an altarpiece by the Italian Baroque artist Giovanni Francesco Barbieri, commonly known as Guercino.

The piece depicts the celebration of Luigi (also known as Aloysius) Gonzaga, who resigned his inherited title of marquis (he was a member of a prominent Renaissance-era family) to become a Jesuit in 1585 in order to care for the poor in Rome.

What does this painting and the man it depicts have to do with March Madness?

Turns out a lot. Gonzaga (the saint) and Gonzaga (the basketball team) are two different things. Nonetheless, the patron saint of Christian youth — who then died serving the poor in a pandemic — can help inspire a team to the final prize. Indeed, it would be only fitting that Gonzaga win it all after the year of COVID-19. And during a college basketball season when historical powerhouses such as North Carolina and Duke are not in contention, Gonzaga could very well capture its first national championship.

It’s no surprise that a Catholic university is among the heavy favorites this season in men’s hoops. After all, Catholic centers of higher education are no strangers to winning the NCAA Tournament. Villanova did it as recently as 2018.

Leading the pack is undefeated Gonzaga, runners up in 2017, who are undefeated so far this season. The school, located in Spokane, Wash., was once considered an underdog capable of defeating high-ranked teams, has reached the tournament every season since 1999. They have advanced to the Sweet 16 on six consecutive occasions.

“Gonzaga, the university, honors Gonzaga, the saint, with a statue at a parish church adjacent to the campus. Aloysius Gonzaga is depicted carrying a man diminished by disease, head resting on the saint’s shoulder,” wrote Erik Brady, a sports reporter for USA Today. “The sculpture commemorates Gonzaga’s time in plague-swept Rome in the late 16th century, when he would seek sufferers in the streets, carry them to hospitals, wash their wounds and nourish their souls.”

Gonzaga, which are ranked No. 1, is poised to win the title after reaching the Final Four on Tuesday night following a 85-66 blowout of No. 6 USC.

For now, Gonzaga is on a collision course to meet Baylor, a Texas Baptist research university in Texas, in the championship game. Religion storylines are no surprise this time of year when it comes to basketball (Oral Roberts’ Sweet 16 run earlier in the tournament sparked some controversy) and schools like Gonzaga make sure there’s plenty for sportswriters to ponder as they file their stories from various Indiana venues, where the tournament is being held this season because of the virus.

But Gonzaga’s name has also resulted in some botching the way to pronounce the school’s name.

“It seems to come up every year during NCAA Tournament time,” Pete Tormey, the school’s associate director of public relations, told NBC. “To be honest, it’s really kind of a regional pronunciation. Things are pronounced differently and we understand that, so it’s kind of a tongue-in-cheek situation.”

All this confusion comes for a program that’s relatively new at basketball success. The private liberal arts school made the NCAA Tournament for the first time in 1995.

CONTINUE READING: “Why It’s Fitting That Gonzaga Is Favored To Win The NCAA Tournament During A Pandemic” by Clemente Lisi at Religion Unplugged.

Is share market closed on Friday? All you need to know about NSE, BSE trading holiday tomorrow

Leicester vs Man City preview: How to watch on TV, live stream, team news and prediction

Leicester vs Man City preview: How to watch on TV, live stream, team news and prediction

A Boogie Says Despite Setting His Children’s Mother Ella Bands ‘Free,’ He Can’t Be Friends With Anyone Trying To Date Her